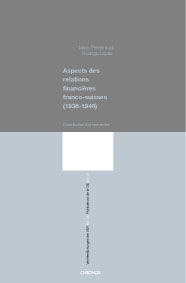 Financial dealings with France play a decisive role in the history of the Swiss banks. The period under review begins with the victory of the Popular Front in 1936, and ends at the time of the negotiations with the Allies in 1946. Political tensions were created by the flight of French capital and its management by banking establishments. The vigorous defence of the banks' interests in the war and post-war context guaranteed the conditions which enabled Switzerland to prosper as a financial centre.
Statistics relating to Franco-Swiss financial relations are presented, along with the main parties involved (banking establishments and professional associations). The private banks of Geneva, and the two largest banks (Swiss Bank Corporation and Credit Suisse) are at the centre of this analysis, which allows us to distinguish four phases:
During the 1930s, bilateral negotiations were concerned with the effects of the «tax frauds» uncovered by the case of the Banque commerciale de Bâle in 1932, the problems of double taxation, and French loans placed in Switzerland. Political tensions in the world in general, and France in particular, sparked the intensification of bilateral relations: scalded by the crises in Germany and Central Europe, the Swiss banks attached particular importance to France both for exports and for the management of capital.
The second phase covers the years 1939 and 1940. The threat of war and military operations exerted an influence on economic exchanges. France allowed an increase in exports for the armaments industry, and also ensured the export of capital to the United States (including gold belonging to the Swiss National Bank). Banking secrecy remained paramount despite the freezing of French assets in Switzerland as decreed by the Federal Council at the request of the industrial sector and the Swiss National Bank.
The third phase corresponds to the years of the Vichy Regime. From the summer of 1940, the Swiss Bankers Association attached special importance to exchanges with France. The Swiss banks were pleased at the accommodating behaviour of the French authorities, which were endeavouring to honour their financial commitments by importing gold into Switzerland. They were also faced with transactions linked to the German occupation: Aryanization, the transfer of French companies to other countries, and an influx of plundered securities and banknotes into Switzerland.
The fourth phase began in 1943: post-war relations were all the more important since trade with Germany was collapsing. France was to benefit from facilitated financial dealings, whilst banking secrecy was to be reinforced.
Finally, the role of a typical player, the Geneva private banker Albert Pictet, is recalled in the context of Franco-Swiss relations.