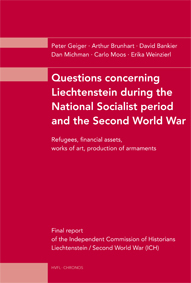 In 2001 the Government of the Principality of Liechtenstein set up the Independent Commission of Historians Liechtenstein / Second World War (ICH), with international composition. The task of this body was to investigate in a scholarly fashion specific questions on Liechtenstein's role during the Second World War that have arisen in recent times. The Commission's brief concerned in particular questions of property connected with the Nazi regime, especially the shifting of looted items and Nazi property in the form of money, gold, securities or works of art, as well as dormant accounts. Then the official policy regarding refugees was to be investigated, also production of goods for German military requirements, and finally the question as to whether there were any connections between Liechtenstein businesses and «Aryanisation» and forced labour as practised in Germany. The Commission of Historians employed experienced researchers to investigate the individual topics.

This final report of the Independent Commission of Historians Liechtenstein / Second World War, which together with the individual studies was submitted to the Government in 2005, contains a synthesis of all the investigations that were carried out. At the same time, these studies are presented in the context of the country and the historical events of the period. The final report is herewith made available in an English version.