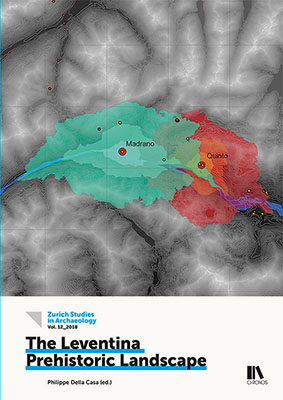 This comprehensive volume presents the results of a large interdisciplinary archaeological project realized in the Ticino valley of Switzerland and its adjacent regions between 2006 and 2012. The focus of the manifold surveys, analyses and modelings is on settlement structures, environmental contexts, and ecodynamic processes, from the younger Prehistoric periods to Roman times. The texts are gathered in over a dozen contributions, teaming 25 authors from various disciplines and countries of Alpine Europe.

The main objective of the investigations is the Leventina valley, situated on one of today’s major transalpine routes, leading from the Insubrian lakes across St Gotthard pass to the Reuss valley and Central Switzerland. Very few archaeological remains were known from this area before the onset of the project, in particular with regard to the abundant subalpine environments. Archaeological excavations in Airolo-Madrano and surveys on various altitudinal levels of the valley, along with a full set of new sites and radiocarbon dates, as well as archaeobiological, anthracological and palynological research and GIS-based modeling, allow now to draw a realistic image of the valley’s societal, environmental and economic situation in Prehistory, with scenarios of early Alpine Economy proposed for the Bronze and Iron Ages. Moreover, a detailed case study in GIS on population and settlement dynamics in a wider region, covering along with canton Ticino the bordering areas of Lombardy and Piemont in Italy, supplements and contextualizes the results gained in the Alpine Ticino valley. This supra-regional investigation is the first of its kind for the south-Alpine area.